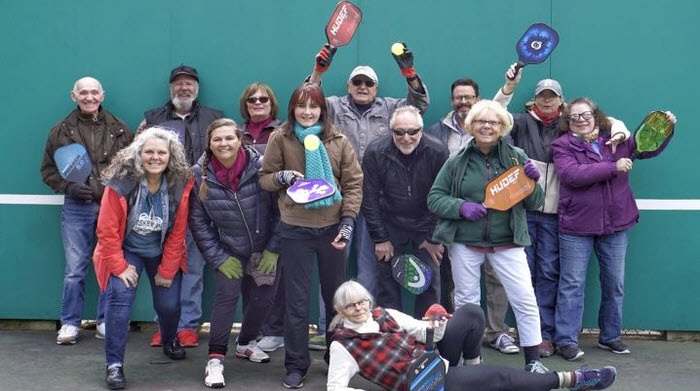 Pickleball has become one of the most popular sports across the nation and has big and growing following on the island. Likewise, a series of bocce ball tournaments over the last several years has generated intertest for that game as well. A group of players have come together with a proposal to establish two courts for pickleball and one for bocce ball all in the Peaine Township Park located behind the township hall. “We’ve used the park for several bocce ball tournaments.” says Frank D’Andria, one of the organizers of the drive to build the courts. “It is a perfect location, but just playing on unfinished ground really doesn’t let you enjoy the full strategy of the game.” Bob Anderson, who is a big Pickleball fan, says it is great exercise and has a constantly growing following on the island. “More and more folks are coming out to play.” he says. “You can make it as vigorous or easy going as you like, so it is great for agile and not-so-agile alike. We have been playing outdoors at the Tennis Courts, but they can get quite busy in the summer, which can limit play. Dedicated courts would allow for proper marking and would open up more playing time,” he says.

Proponents say the project will cost $61,000, and they need $34,000 to complete the funding. Too that end, the BIA has worked with the group to set up a GoFundMe page to help raise the funds. The BIA is the proponent of the project on the GoFundMe site and will act as the custodian of the funds. “We’ve been working on a number of ‘infra structure’ type projects,” says BIA VP Dick Mulvihill. “Last fall and into the spring it was the Dark Sky Sanctuary; now its these great court proposals. We’re glad to work to help make this happen.”

You can help support the project by visiting the site here: https://gofund.me/b7c94595. You can play pickleball (no bocce ball yet) Mondays, Wednesdays and Thursdays from 1:00 to 3:00 p.m. Play is outside if the weather is nice and inside at the BIC Center when not so much.