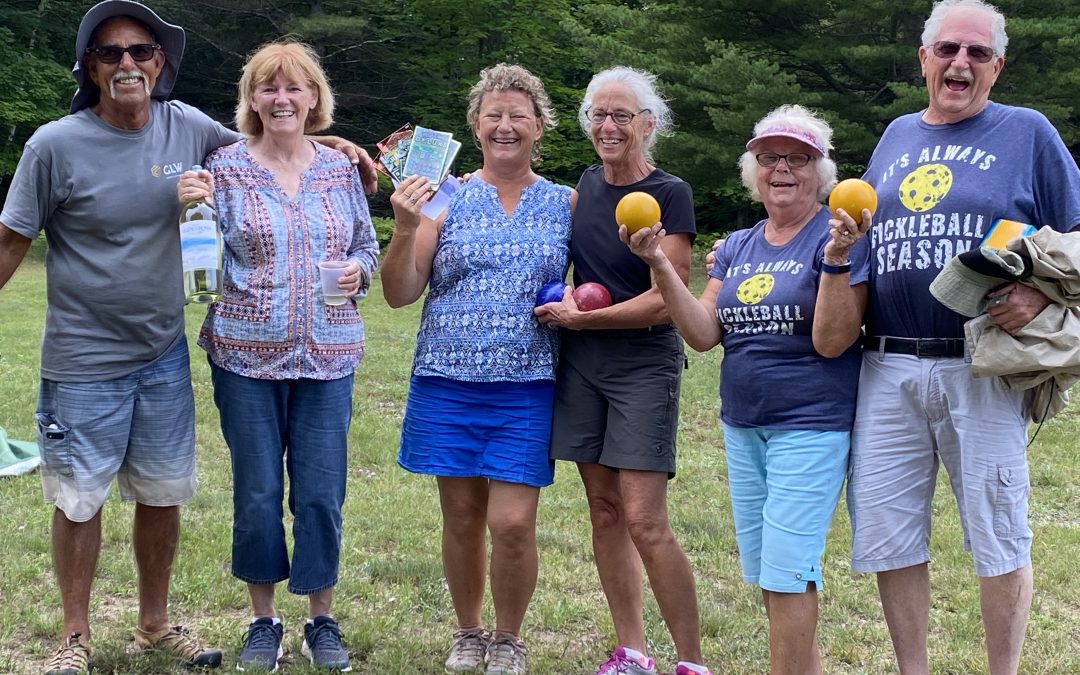 This year’s Annual Bocce Tournament or “Roll”  turned out to be a nail-biter, as nearly two dozen teams vied for a variety of prizes and bragging rights. The final three teams were Tom Reynolds and Linda Wearn,  Joan Callan and Sue Screven, and Jan and Dave Paul.    Joan and Sue and Dave and Jan contested for first place and up to the last few minutes tied at 8-8. Then, as the end of the allotted time for the tournament neared, Joan  Callan and Sue Screven made a point, bringing home the title for the two women.   Dave and Jan Paul finished second.  Tom Reynolds and Linda Wearn made a gallant effort to secure the win but finished third.

“Bocce players roll come rain or shine,” exclaimed Tom Reynolds as he headed over to congratulate the winning team.

The annual bocce ball tournament is always a festive event with a delicious lunch included in the ticket price.  Despite intermittent rain showers, about 55 people braved the elements and attended the tournament,

The event raised just under $1,700 and all proceeds are going toward underwriting the building of two bocce courts and two pickleball courts in the park located directly behind the Peaine Township Hall.  The cost of the “courts project” is estimated to run between $60,000 – $65,0000.  About $50,000 has been raised to date from a variety of sources, including bocce and pickleball players, township commitments, gifts, and a Charlevoix County Community Foundation grant. The first tournament was held in 2017. Tournament organizer Frank D’Andraia, said ticket sales and attendance have  doubled since the tournament began.  He added, “In 2022 all ticket proceeds will go to support the Beaver Island Food Pantry.”    Other island organizations that have benefited from tournament ticket sales have included the Beaver Island