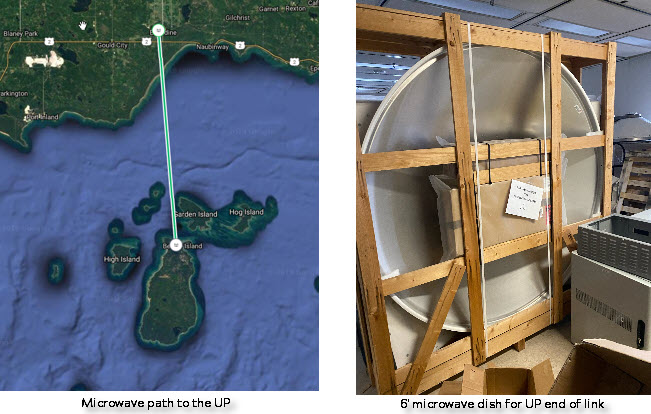 The Joint Telecommunications Advisory Committee held a special meeting yesterday to discuss the island’s broadband plans with staffers from Congressman Debbie Dingell’s office. The Committee expressed the view that the past approach taken by congress, which focuses broadband development fund on incumbent carriers isn’t working for remote, rural communities like Beaver Island.  They urged that funds be directed to community driven projects. Although Dingell’s district is downstate, she has special concerns about broadband and wanted to learn about the island’s issues.

Meantime, the committee had an update on its project to bring 200 megabit per second service to key locations on the island including the library, school and community center.  All of the equipment is in and is being configured and tested. Next task is scheduling the installation with a goal of having the system running by spring. The project is being funded by the organizations that will receive service. They’ve formed an unincorporated association to manage the project called the Beaver Island Broadband Consortium.

“It is good to see this project ready to come online,” said Kevin Boyle, who chairs the JTAC and serves as the PABI representative to the Beaver Island Broadband Consortium. “We’ve been working on this for several years and have overcome hurdle after hurdle. This completely island designed and funded project shows what the community can do for itself and will help show folks what can be done with internet speeds that are similar to what’s available elsewhere.”

In its meetings, the JTAC has stressed that the current project is what they term a “band aide” on the island’s broadband problem. “The JTAC is eagerly awaiting word on the NTIA grant application filed to support a fiber to the home system on the island, and we have backup plans in case we don’t get that grant,” says BIA President Dick Mulvihill, who was worked closely with the JTAC since its founding and with Boyle on the BIA’s broadband efforts. “True high-speed broadband is critical to the island’s economic sustainability,” Mulvihill added. “Right now, we are the poster-child for the connectivity problems faced by poorly served rural communities.”

A prior version of this report appeared on wvbi.net.